Individuals with familial hypercholesterolemia (FH) were able to lower their cholesterol under FH specialty care, but many are still not meeting LDL-cholesterol targets, according to the Family Heart Foundation’s CASCADE FH® Registry. In new research published in the October issue of Atherosclerosis, 52 percent of adults with FH still had LDL-cholesterol over 100 mg/dL despite being on multiple cholesterol-lowering treatments. In addition, these individuals with FH had high heart attack, stroke, and vascular procedure rates, with an annualized cardiovascular event rate of 2.21 per 100 patient years overall, and 4.57 if an individual had a prior cardiovascular event

“These data from the CASCADE FH Registry demonstrate that individuals with FH are truly a vulnerable, high-risk population for future heart and stroke events, despite being on multiple treatments,” said P. Barton Duell, MD, Professor of Medicine, Director, Lipid-Atherosclerosis Laboratory, Center for Preventive Cardiology, Knight Cardiovascular Institute, Oregon Health and Science University. “These data suggest that FH patients without known heart disease may actually have a risk of heart attack that is comparable to the risk in patients without FH who have already had a heart attack. Most individuals with FH will require multiple medications to adequately lower the LDL-cholesterol level to below goal. Adding additional medications to achieve an LDL-C level that can help prevent a heart attack, particularly for those who already have heart disease, needs to become the standard of care.”

“These five years of data from across the United States underscore the impact of life-long exposure to LDL cholesterol in the FH population,” said Katherine Wilemon, Founder and CEO of the Family Heart Foundation. “The vast majority of individuals with FH in the United States continue to live without a diagnosis, barring them from the opportunity to receive appropriate care. Finding these individuals and initiating intensive treatment early in life is critical to preventing heart disease.”

The results confirmed very late diagnosis of FH, at age 50 (plus or minus 18 years). Lack of awareness of FH in the public and medical community contributes to low diagnosis rates in the United States.

The results also highlighted the broad number of treatments that are now available for FH and the benefit individuals received by being on multiple therapies. The majority of patients are on three to six treatments to lower their LDL-C. Specifically, the use of high intensity statins and PCSK9 inhibitors, as well as treatment with LDL apheresis, at enrollment were associated with a higher likelihood of reaching LDL-C goals. Individuals who achieved more than a 50 percent reduction in LDL-C took more lipid lowering therapies during follow-up, compared to those who achieved less than a 50 percent reduction.

“Today, there are more safe and effective treatments for individuals with FH. With multiple LDL-C lowering drugs, plant sterols, LDL apheresis and exciting experimental therapies in development, individuals should advocate with their healthcare providers to add treatments until their LDL targets are achieved,” added Samuel Gidding, MD, chief medical officer for the Family Heart Foundation. 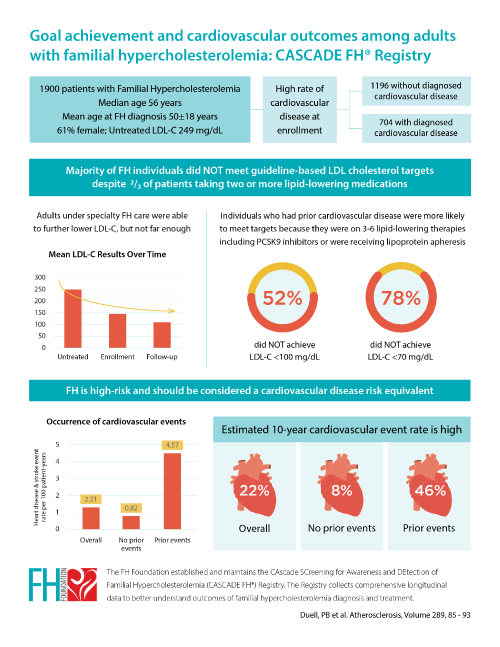 About the CASCADE FH® Registry

The CAscade SCreening for Awareness and DEtection of Familial Hypercholesterolemia (CASCADE FH) Registry is a national multi-institution observational study that includes the largest cohort of individuals with FH in the United States. FH is a common genetic condition that causes very high cholesterol and can lead to early heart disease if untreated. Only 10 percent of individuals with FH are diagnosed in the United States today. the Family Heart Foundation established and maintains the Registry to increase FH awareness, analyze diagnosis and treatment rates, and monitor clinical outcomes.

About the Family Heart Foundation

the Family Heart Foundation is a leading research and advocacy non-profit organization focused on reducing heart disease by driving scientific understanding and evidence-based care of familial hypercholesterolemia. Our mission is to save lives by contributing to scientific research that leads to greater understanding and improved diagnosis and treatment of FH worldwide.