A second question I am often asked, “given that my cholesterol is so high because of a genetic cause, can diet improve my life expectancy?”

I would like to argue that diet does help lower your cholesterol and those with the highest cholesterol might benefit the most from diet management. New genetic research provides further support for this argument.

Three types of research suggest diet might help those with FH. First are studies based on “mendelian randomization.” These studies compare people with cholesterol raising genes to those with cholesterol lowering genes to determine the lifelong impact of having lower cholesterol. There are many genes that do this and the results are consistent — for every 10 mg/dl lowering of LDL cholesterol there is a 15-20% reduction in risk. Thus, a lifelong healthier diet has the potential to achieve the same long-term benefit as these studies.

The second type of research relates to a specific gene that raises and lowers cholesterol, NPC1L1. This gene regulates cholesterol absorption from the gut and is the target of action for ezetimibe, a cholesterol lowering drug. Studies of this gene support the mendelian randomization analyses above and we also know that ezetimibe works. Therefore, if your diet is good and has low saturated fat and cholesterol it should also help.

The third type of research is on gene-health behavior interactions. These studies include smoking and obesity prevention as well as a heart healthy diet. In these studies, the people who benefit the most are those with a genetic predisposition to disease whether it is heart disease or diabetes. Why? Because if you have the highest risk you are likely to get the most benefit. If you are genetically unlikely to have heart disease, then you will still lower your risk with a healthy lifestyle, but the amount of lowering is actually less than for those with genetic risk.

Why Does Diet Work?

Back when lower potency statins and bile acid sequestrants were the only treatments available, scientists wondered if the benefits of diet plus medicine would cancel each other out, be additive, or even synergistic (the two together would be more potent). They found the effects were additive, diet and medication work together to lower cholesterol but a synergistic effect was not seen. 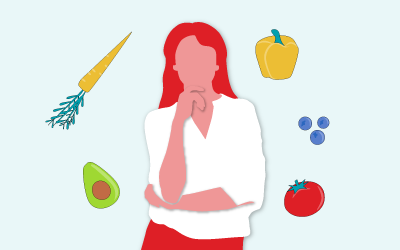 What is the Best Diet?

If your cholesterol is high, you need to lower your intake of saturated fat and cholesterol. Randomized trials have shown that diets lower in saturated fat lower heart disease event rates in the general population. The American diet has improved over time as lower fat dairy products are readily available and less red meat is being consumed. Trans fats have been mostly eliminated from the food supply. People eat less eggs, high fat processed meats (e.g. sausage, bologna, hot dogs) than in the past and organ meats (e.g. liver) than in the middle of the twentieth century when heart attack rates were very high. People with FH have likely benefited from these population shifts in the diet.

Current diet recommendations for FH are:

Controversy exists for other diet treatments. Fish oil treatment or supplements do not lower LDL cholesterol. Whether or not fish oil prevents heart disease by other mechanisms is under study, they certainly are not harmful. Plant sterols and stanols, often found in butter substitutes and other similar products lower LDL cholesterol levels but have not been shown to prevent heart attacks. These diet products are often recommended, but long-term benefit is not as certain. 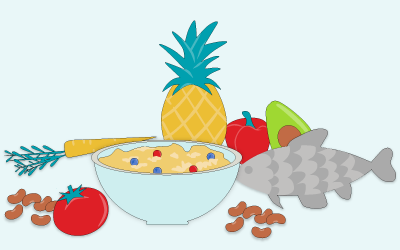 Special FH population who might benefit the most from diet

There are currently three groups of FH patients for whom diet might be especially helpful. First are children who are less than 10 years of age and are not ready to start on medication. Learning to like a healthy diet might also have lifelong benefit. Second are pregnant women. Often cholesterol lowering medications are stopped during pregnancy and breast feeding, so a healthy diet will lower cholesterol levels in that setting. A third group that is emerging and is likely to become more numerous are people with an FH gene but have LDL cholesterol below treatment thresholds. These individuals are at higher risk but are currently not candidates for lifelong medication. Diet in this setting will have an important impact on heart disease prevention.

Patients with FH will get some benefit from diet because they are at the highest risk for heart attacks. The amount of benefit from diet change depends on the baseline diet.  If your diet is already good your cholesterol might already be 20-40 mg/dl lower than if your diet was poor.  Diet effects are less significant on ezetimibe, but there are no studies to provide information on this. FH patients currently not eligible for medication will definitely benefit from diet management.  Diet might lower total medication dose in some people but there are no studies to confirm or refute this. LDL lowering from diet is not as great as from high potency statins or PCSK9 inhibitors, so these must be continued to achieve LDL cholesterol treatment goals in most cases.

Sam S. Gidding, MD is known for founding PEDAL, a consortium dedicated to prevention of adult onset lipid related diseases beginning in youth. He is a member of the ACC/AHA task force on clinical practice guidelines and has participated in the development of new adult and pediatric blood pressure guidelines. He has previously worked on guidelines/scientific statements on familial hypercholesterolemia, hypertension, tobacco, obesity, nutrition, diabetes, and congenital heart disease for AHA, AAP, NHLBI, WHO, CDC, EAS, NLA, and ADA. Dr. Gidding has been a visiting professor at the Cleveland Clinic, University of Miami, University of Pittsburg, University of West Virginia, Children’s Hospital of Philadelphia, Texas A and M University, Brown University, the University of Hawaii, Montefiore Hospital, and the University of Michigan and lectured internationally.

Past clinical interests included preventive cardiology, general pediatric cardiology, echocardiography, exercise, and heart failure/transplantation. Prior funded research includes co-investigator for the echocardiography reading centers of the TODAY and CARDIA studies and a study on cardiovascular risk in Down syndrome. He was a co-investigator of the DISC study and collaborated with the Bogalusa Heart Study. Dr. Gidding participated in many local studies on congenital heart disease, on the cardiovascular morbidity of obesity, and early imaging of atherosclerosis. He helped design the DO-IT trial, a statin intervention trial in adolescents funded by the Pediatric Heart Network (NHLBI) and remains a site co-investigator for the AMGEN pediatric PCSK9 inhibitor trial.