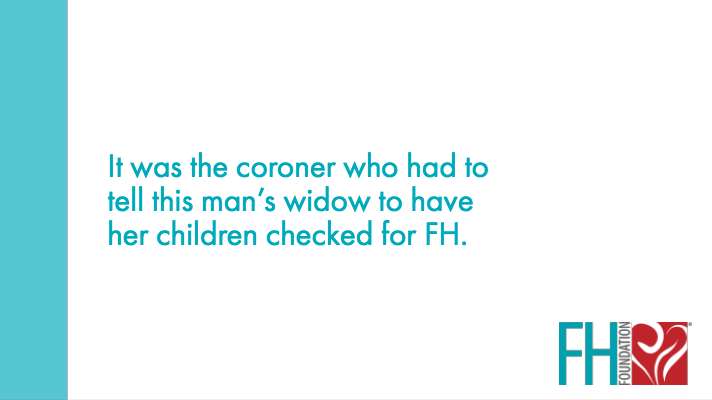 This week I heard about a young family who lost their husband and father, suddenly and right in front of their eyes. He had a massive heart attack and was gone. Sadly, working for the Family Heart Foundation, I have heard this story too many times. It’s especially heartbreaking because we know that when heart disease is caused by Familial Hypercholesterolemia (FH), there is a lot we can do to prevent this devastating loss. We’re just not doing it.

It was the coroner who had to tell this man’s widow to have her children checked for FH.

Why did his doctor fail to convince him that he had a genetic disorder he could not control without medication? Why did the pediatrician fail to screen the children based on the family history? How can we find ourselves in a place where a coroner is delivering this vital medical guidance after it’s too late?

Doctors, don’t leave it to the coroner. Be proactive about finding FH in your practice and helping your patients to understand the risk they face and the opportunity they have to prevent heart disease for themselves, and their children.

There are many diseases and risk factors we are struggling to understand and for which we are desperate to find effective treatments. FH is not one of them. We know FH is a genetic disorder that causes very high LDL cholesterol from birth. We know high LDL cholesterol causes atherosclerosis and cardiovascular disease. We know that people with FH are at 20 times the lifetime risk for early heart disease. We know that high LDL cholesterol and a family history are red flags for FH. Most people have that information in their chart already. We have effective statin treatment we know can almost normalize the risk of early heart attacks and premature death. For those who need more help to lower their LDL cholesterol, we have combination therapy with ezetimibe and PCSK9 inhibitors. We have everything we need to fight FH.

We are simply failing to identify the 1 in 250 people who have inherited FH – 90% of those with FH remain undiagnosed.

Why? I’m at a loss for a good answer. I am baffled when I hear of a woman who has had cholesterol deposits on her eyelids removed several times by her dermatologist. When she asked what they were, he told her not to worry about it. My heart breaks for a mom and dad who have just learned their toddler has Homozygous FH caused by inheriting the gene from both parents. Why did their doctors not diagnose FH in the parents and explain the risk to their child? They have the right to this information so they can make their own, informed, decision when it comes to planning their family and protecting their children. I’m floored when I hear from women whose LDL cholesterol has always been in the 200s or 300s, whose doctors told them not to worry because they were protected by estrogen and a good HDL cholesterol number. I simply do not understand when I hear from men and women who have always known they have “off the charts” high LDL cholesterol and a family history, but never heard the words Familial Hypercholesterolemia until years after they had a heart attack or bypass surgery.

FH diagnosis matters. It is not enough to tell someone they have high cholesterol and prescribe a low-dose statin. They have to understand they have a genetic disorder that puts them at much higher risk for early heart attacks and death. They must understand how important it is to screen their children and other family members. And they must be treated aggressively enough and early enough in their lives to prevent heart disease before it’s too late.

the Family Heart Foundation is working hard to raise awareness of FH, to drive FH research, develop tools to accelerate diagnosis, and advocate for access to better treatment. But, if doctors don’t use the tools they have in hand to proactively look for FH, ensure that their FH patients are well managed, and that their affected family members are screened, then we will see yet another generation suffer needlessly from the devastating effects of FH.

Doctors, the next time you see an adult with untreated LDL cholesterol over 190 mg/dL, a child with untreated LDL cholesterol over 160 mg/dL, or a young person in your ER or Cath Lab with a heart attack, talk to your patient about FH. Really ask them about their family history. Tell them they have to get their children’s cholesterol tested. Explain to them that FH is different, what the risks are, and what an incredible opportunity they have to prevent early, devastating, heart disease with the right treatment.

Don’t leave it to the coroner.

Cat Davis Ahmed is the Vice President for Policy and Outreach for the Family Heart Foundation.  She and her family are impacted by familial hypercholesterolemia (FH).