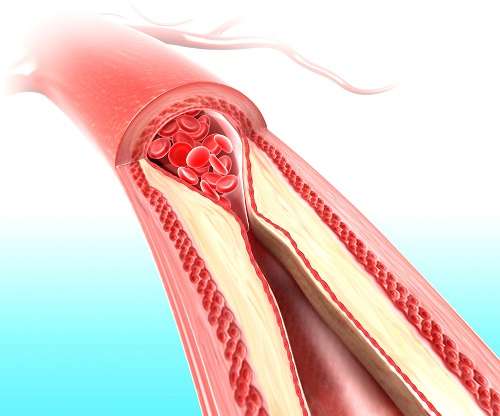 Familial Hypercholesterolemia (FH) is a genetic condition that leads to aggressive and early heart disease, including heart attacks, strokes, and congestive heart failure. Individuals with FH have a 20 times higher risk of heart disease than the general population.

How Does FH Affect the Body?

FH limits the liver’s ability to regulate low-density lipoproteins, commonly known as LDL or “bad” cholesterol. When LDL builds up, it can narrow the arteries, constrict blood flow, and form plaques that can rupture, leading to coronary damage and disease.

Cholesterol is necessary to the function and structure of human cells, and is naturally produced by the liver. We also consume cholesterol in the food we eat. Cholesterol is moved through the blood in particles called lipoproteins. High density lipoproteins (HDL) and LDL are the readings that doctors typically discuss when they talk about levels of “good” cholesterol (HDL) and “bad” cholesterol (LDL). The lower the LDL number, especially when paired with a higher HDL level, the better the cholesterol reading is said to be. Because their livers do not function properly, people with FH have extremely high levels of LDL that are often not able to be controlled through diet and exercise alone.  Lowering LDL is the main goal for treating FH.

What Is Familial Hypercholesterolemia Capable of If Left Untreated?

Leaving familial hypercholesterolemia untreated can lead to very serious, potentially fatal results. FH can lead to heart attack, angina, bypass and stenting.  According to the National Human Genome Research Institute, men with FH are more likely to have heart attacks between the ages of 40-50. Women with FH also have an increased risk for heart attack, generally between the ages of 50-60.  If Homozygous FH, the more serious form of the disease, is left untreated, heart attack or sudden death can occur as early as the teenage years.

How Is Familial Hypercholesterolemia Inherited?

Familial Hypercholesterolemia is an autosomal dominant genetic disorder, meaning that only one parent needs to have the condition for his or her children to inherit it. The abnormal gene is dominant, so even if the child receives a healthy gene from the second parent, the altered gene will override the healthy one. Those with one parent with FH have a 50 percent chance of inheriting the condition, known as heterozygous FH (HeFH). According to the National Institutes of Health, people with heterozygous FH typically have an LDL cholesterol level two to three times higher than normal.

If both parents have FH, their children have a greater risk of a more serious form of the disease. In addition to the 50 percent chance of having HeFH, these children have a 25 percent chance of having homozygous FH (HoFH), which results from receiving two altered chromosomes. HoFH results in aggressive narrowing and blocking of the blood vessels that starts even before birth and progresses very rapidly, resulting in extremely early and serious heart disease. Individuals with HoFH have LDL cholesterol levels three to six times higher than normal, according to the NIH.

How Common Is FH?

One in every 200-500 people worldwide has familial hypercholesterolemia. In the United States, more than 600,000 people have FH and nearly 90 percent of those people are unaware that they have it. HoFH is very rare, occurring in about 1 in 160,000 to one in 1,000,000 people worldwide. FH is more prevalent in certain populations, including French Canadians, Ashkenazi Jews, Christian Lebanese, and South African Afrikaners. In these populations FH may be found as frequently as 1 in every 67 people.

People with FH often don’t show any visible signs, so it is important to be aware of any family history of high cholesterol, early heart disease or heart attacks when considering your risk. If a family has a pattern of heart attacks or heart disease in men before age 55 or in women before age 65, the American Academy of Pediatrics recommends that children in that family should undergo cholesterol testing as early as age two, and before age 10.