Data Highlighted in Poster Presentation at the NLA Scientific Sessions

SCOTTSDALE, Ariz., June 3, 2022 – The Family Heart Foundation completed an analysis of its large U.S. Family Heart Database™ demonstrating that Lipoprotein(a) – also referred to as Lp(a) — is rarely assessed, despite it being a common, independent risk factor for atherosclerotic cardiovascular disease (ASCVD). Of the 112 million individuals for whom data was analyzed, only 0.3% had at least one Lp(a) measurement. The data is being presented in a poster titled, “Characterization of Lp(a) Measurement in a Large U.S. Health Care Dataset,” at the National Lipid Association (NLA) Scientific Sessions on June 3 at 11:25 CT in Scottsdale, Arizona.

“Elevated Lp(a) is a known risk factor for premature cardiovascular disease such as heart attacks and strokes, and it’s estimated to be present in 20% of the population,” said Mary P. McGowan, M.D., chief medical officer, Family Heart Foundation, and study co-author. “Yet, it appears that few people have their Lp(a) measured, and when it is measured, it is only for individuals with multiple cardiac risk factors. While the analysis provides great insights, more research is needed to understand barriers and facilitators to Lp(a) testing within the healthcare setting.”

To determine how commonly Lp(a) was measured, data was analyzed using the Family Heart Foundation’s large, real-world, national healthcare database which includes more than 300 million Americans — 112 million with laboratory data. Of those, Lp(a) was measured in only 0.3% (335,726). In addition, the data indicated that individuals who underwent Lp(a) testing were older, more frequently had additional cardiac risk factors such as hypertension, elevated cholesterol and diabetes, and were more commonly female compared to those who were not tested. Furthermore, of the 810,119 health care providers who had patients with laboratory data in the database, 0.08% (629) were responsible for more than 50% of the testing. 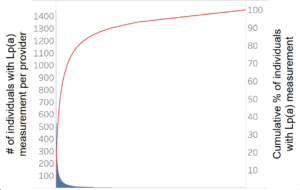 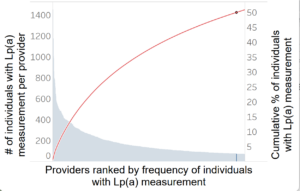 Elevated levels of Lp(a) increase inflammation, plaque buildup inside the arteries, and appear to promote blood clotting. These attributes can contribute to blocking the flow of blood and oxygen to the heart or brain and result in a heart attack or stroke. Testing for Lp(a) requires a simple blood test, but it is not part of a standard lipid panel, and it needs to be ordered directly.