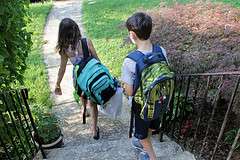 The other day, a concerned mother approached me at school questioning the need for testing cholesterol levels in kids. She admitted that she wanted to skip the cholesterol test the pediatrician had scheduled for her ten-year-old daughter. After all, she explained, “my daughter is not overweight.” It was not the first time I had heard that concern. I assured her that her pediatrician was correct; all children should have their cholesterol checked between the ages of 9 and 11, and again between 17 and 21 years of age, something we refer to as “Universal Pediatric Cholesterol Screening.” The real question this mom was asking was “Why?” As a mother myself, I can definitely understand the desire to avoid drawing blood on my children.

The prior American Academy of Pediatrics (AAP) recommendations from 2008 targeted testing in children with certain risk factors, including obesity, diabetes, or a family history of early heart disease. When the new guidelines published by the National Heart, Lung and Blood Institute (NHLBI), and supported by the AAP, expanded the testing net in 2011 to include all children between the ages of 9 and 11 (and again between ages 17 and 21), it was a big change. So why on earth would America’s top experts in the heart health of children want to draw blood, quite literally, on all of America’s kids? The idea that cholesterol problems only occur in overweight individuals may be the most common myth I encounter as a cholesterol specialist. It is also one of several misunderstandings worth laying to rest.

Here are my top 4 key truths about cholesterol testing in children:

1. Genetic cholesterol disorders are common and real. The most common genetic cholesterol disease, Familial Hypercholesterolemia (FH), is a severe, inherited cholesterol disorder that occurs in 1 in every 500 individuals in the U.S. Some experts think it might be as common as 1 in 250 people. FH is more common than Type 1 Diabetes or Cystic Fibrosis. The majority of people in the United States with FH have no idea they have the disease. Children with FH don’t feel sick from it at all. However, people with FH usually develop early signs of atherosclerosis (artery thickening and blockage) by school age and have a higher likelihood of a heart attack before they reach middle age. A simple cholesterol test can detect most kids with FH. If we detect FH in childhood, treatment is available to delay or perhaps even prevent artery plaques and blockages.

4. Screening kids offers an opportunity for all families, including your family. Although families with FH may need to consider medications, ALL families can focus on better nutrition and activity. None of us are perfect parents. We try to teach our kids to eat right, be active, and limit the time they spend sitting and looking at screens. There are days we succeed and days we do not. Spending time with your child’s doctor reviewing a “snapshot” of your family’s current nutrition and activity behaviors, and then setting future goals, is a true opportunity. If your child’s weight or cholesterol numbers aren’t ideal, it can energize you to reassess, take control and redirect your efforts while we can still prevent disease. Even if all their numbers turn out to be normal, take the time to consider how you are doing with your own daily choices on nutrition and physical activity. You are your child’s most important role model. Remember that the ages of universal screening fall at times when our kids are becoming independent and forming lifelong habits. Now is the time for positive changes. I’m pleased to say that this mother decided to keep the appointment for her daughter’s test. Once we help families understand the truth behind the National Heart, Lung and Blood Institute’s 2011 recommendations, we can work together to make unprecedented progress in heart health for future generations.

Dr. Ann Liebeskind is a lipidologist, internist, and pediatrician. She is owner of Mobile Health Team™, a private lipids practice serving individuals and families in Wauwautosa and Neenah, Wisconsin. In addition to complex lipids management, her clinical interests include using tools such as the web, social media, apps and telehealth to empower and engage her patients to reach their wellness goals. She can be contacted through her practice website, mobilehealthteam.com.

3 Responses to “Four Truths About Cholesterol Testing In Children”