If you’ve been diagnosed with high cholesterol, changing your eating habits was probably one of the first steps you were told to take. Cholesterol and diet are so closely linked that adopting a heart-healthy diet is recognized as one of the most important strategies to reduce your risk for cardiovascular disease. For some people, however, lifestyle choices like diet, lack of exercise and being overweight aren’t to blame for their high cholesterol levels. When High Cholesterol Is In Your Genes Familial Hypercholesterolemia (FH) is a hereditary disorder that leads to extremely high cholesterol levels that can’t be lowered by lifestyle changes alone. FH is a genetic condition which makes the liver incapable of metabolizing (removing) excess low density lipoproteins (known as LDL or “bad” cholesterol). This causes their LDL cholesterol levels to be three to six times higher than normal (source: National Institutes of Health). 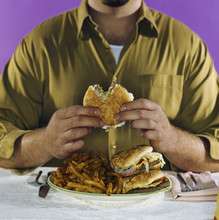 Because these cholesterol readings are so extreme and the cause is genetic, the connection between cholesterol and diet is secondary and simply changing eating habits cannot bring lipid levels within an acceptable range. Medical treatment and medication, or a combination of medications, are always necessary to manage the dangerously high cholesterol levels that put FH patients at risk of early and aggressive heart disease. How You Inherit FH FH is an autosomal dominant genetic disorder, meaning that only one of your parents needs to have the condition in order for you to inherit it. The mutated gene is dominant, so even if you received a normal gene from the second parent, the mutated gene can override the normal one. If you have one parent with FH, you have a 50 percent chance of having the condition. This type of inheritance is known as heterozygous FH (HeFH). If both of your parents have the FH gene, you could have the rarer, more serious form of the disorder. In addition to the 50 percent chance of inheriting HeFH, you also have a 25 percent chance of inheriting homozygous FH (HoFH), which results from receiving two mutated genes. HoFH results in aggressive narrowing and blocking of the blood vessels that can start even before birth and progresses very rapidly, resulting in extremely early and aggressive heart disease. How FH Is Treated If you have FH, it is still important for you to respect the connection between cholesterol and diet, exercise regularly, avoid tobacco smoke, and carry out whatever lifestyle changes are necessary to manage your high cholesterol externally. However, to effectively address your LDL levels and bring them within the acceptable range, you will need medication. Statins are the most widely recognized cholesterol-lowering medications, but FH patients are typically treated with a combination of medicines in which each one has a different role and complements the others. Commonly prescribed cholesterol-lowering drugs include: Cholesterol and diet are commonly linked, but FH patients need a more comprehensive approach to effectively manage their genetic condition. If you have FH, make an appointment with a lipid specialist as soon as possible to figure out which treatment combination works best for you. For more information about FH and how to treat it, contact the Family Heart Foundation, a patient-centered non-profit organization dedicated to the education, advocacy and research of this underdiagnosed yet manageable disorder, at (626) 465-1234.

3 Responses to “High Cholesterol – When Diet Isn’t To Blame”