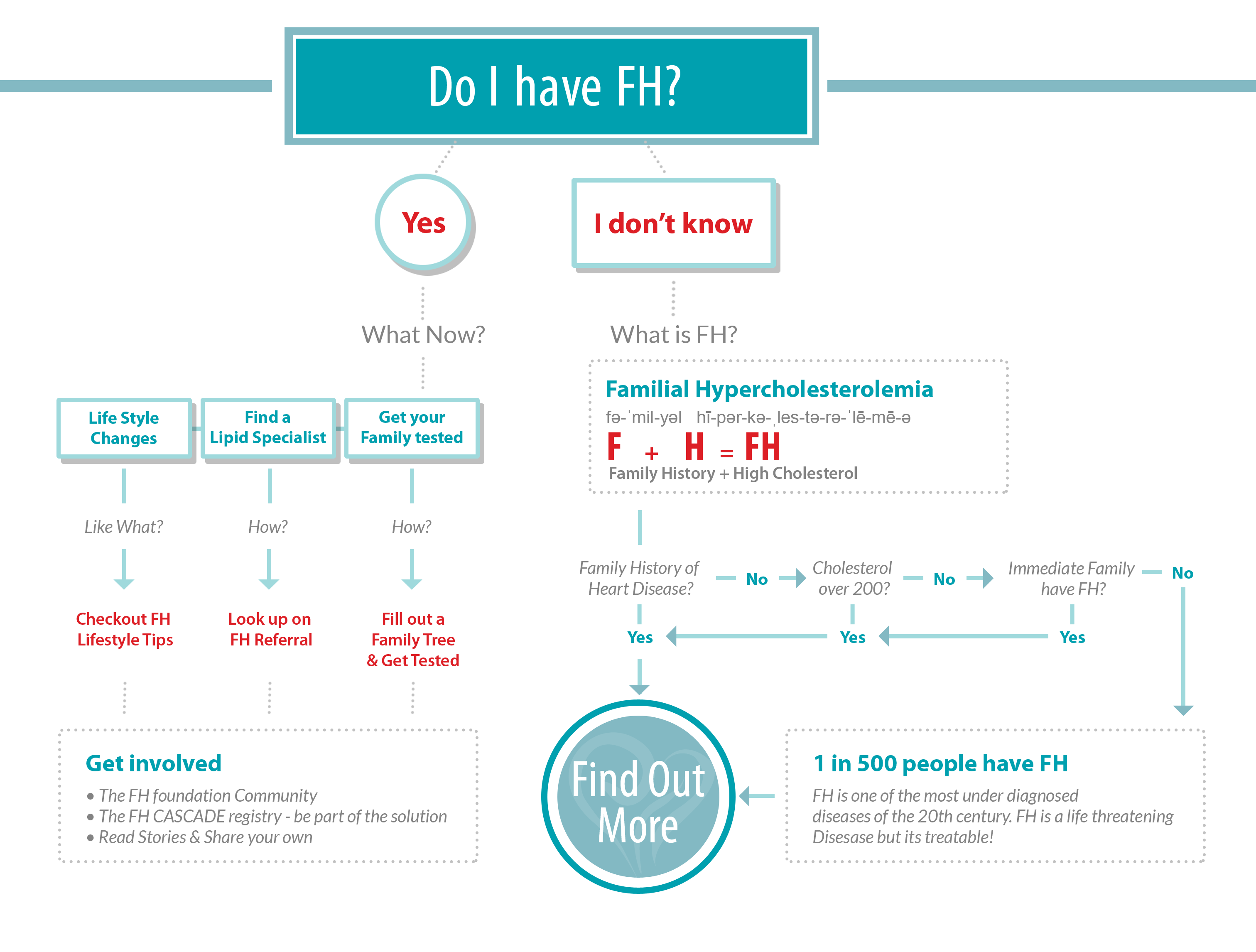 Do you have high cholesterol?


Does high cholesterol (LDL-cholesterol > 190 mg/dL) run in your family?


Has anyone in your family experienced a heart attack, needed a stent or bypass surgery before 55-65 years of age?


Do you have a family history of early heart disease or death from cardiac events?


Have you noticed swelling on your Achilles tendons (the back of the ankle)?


Do you have yellowish deposits around your eyes?

Many individuals with FH feel and look healthy, yet their arteries may be significantly diseased. If you answered yes to any of these questions, you need to work with your clinician to rule out FH as the cause. In the United States it is estimated that only 10% of individuals with FH have been properly diagnosed.

FH is a serious disorder. If left untreated, FH leads to premature heart disease. Yet for most people with FH, until they experience a heart attack, there are few physical signs or symptoms. Some people will develop cholesterol deposits in specific locations including: the Achilles tendons (the back of the ankle) and the tendons of the hands. These are called tendon xanthomas and can sometimes be hard to recognize.

Some people develop orange or yellow fatty deposits around the eyes called xanthelasmas. Cholesterol may also deposit in the periphery of the clear outer covering (cornea) of the eye. This usually occurs in the shape of a half moon (arcus) but can also wrap all the way around the eye. It is generally a whitish grey hue.

Unfortunately, these are not always recognized by treating clinicians as signs of FH. It is also quite possible for a person to have FH without any of the aforementioned physical findings. In general, the older a person, the more likely he or she is to manifest some signs.

Many individuals with FH feel and look healthy, yet their arteries may be significantly diseased. If you have a family history of early heart disease or death from cardiac events, as well as an LDL-cholesterol level over 190 mg/dL, then you need to work with your clinician to rule out FH as the cause. In the United States it is estimated that fewer than 10% of individuals with FH have been properly diagnosed. This means that sometimes patients have to help educate their doctors about FH. This is okay though, as healthy patient-doctor relationships require shared openness and honesty.

Is there FH in my Family?

FH is inherited as an autosomal dominant disorder. This means that if you inherit a single gene for FH, then you will have a very high LDL-C level. The closest relatives of people with FH (parents, brothers and sisters, children) all have a 50% chance of also having FH. In families with FH, there generally is a pattern of people with very high cholesterol and early heart disease. In families with FH, it is not uncommon for people to have heart attacks in their 50s, 40s, 30s, or even 20s. In fact, the risk of early heart disease is about 20 times higher in people with untreated FH than in the general population.