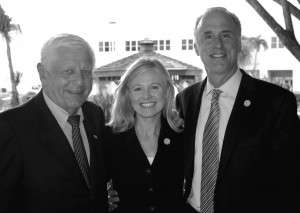 I had the opportunity to meet a woman with Familial Hypercholesterolemia (FH) in South Florida last week. She was as bright and sunny as the state itself. I was in Boca Raton at the invitation of Dr. Seth Baum. I had the privilege to be a guest speaker during his grand rounds on FH. I also went to see his apheresis unit and this is how I met Neweleen. Apheresis is a treatment for FH that mechanically cleanses the excess cholesterol out of the blood and Neweleen was receiving her weekly treatment when I met her.  She and her husband eagerly shared their journey with FH. As a result of her FH, she had a quadruple bypass a few years ago.  She told me that until she found Dr. Baum, who is a certified lipidologist, no one had ever mentioned that her known high cholesterol levels and progressed heart disease might have a genetic cause and be passed from parent to child. As a matter fact, one cardiologist had told her to just stop eating every time she walked through the kitchen! Only someone with FH can appreciate Dr. Baum saying, “you cannot eat yourself to cholesterol levels above 300.”

The only treatment offered to Neweleen were statins. Statins are still a very effective and first treatment option for those with FH, although individuals with FH usually require multiple therapies to bring their levels into a healthy range. Unfortunately for Neweleen, the half-a-dozen statins she tried all resulted in severe muscle aches and pain. It is generally recommended that people with FH try multiple types of statins before determining that they’re statin-intolerant. I personally took every statin that came on the market and always had leg aches until the last statin I tried, which I have now taken for several years at a maximum dose with no side effects. The point is, individuals like Neweleen have fallen through a crack, a crack so large that 80-90% of individuals with FH have never been properly diagnosed.  Treatments exist today to help those with FH and more are on the horizon. In order to receive the right care, the right diagnosis must be made. Why is FH invisible?  Although FH has a broad spectrum of severity, and has complex mechanisms at play, the diagnosis of FH is by all accounts suprisingly simple (a combination of cholesterol levels, physical exam, and personal and family history). This diagnosis gap of FH is not just a statistical reality.  It comes at a real cost to 100,000’s of people like Neweleen. By the time I got home, I had an email from Neweleen titled, “your new FH partner”.  I hope whether you are a physician, patient, family member, or sponsor, that you will partner with the Family Heart Foundation to make FH visible and save lives.

Become a member of the Family Heart Foundation here.