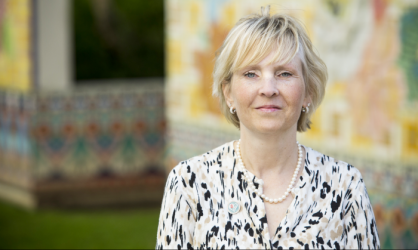 When I was approximately seven years old, my family was referred to Boston Children’s Hospital for evaluation of our cholesterol levels. My father, who was in his mid-forties, had just had a heart attack. This was in the early 1970s, when Brown and Goldstein were embarking upon their remarkable and fruitful collaboration, studying the biochemistry of cholesterol metabolism. This collaboration, which laid the foundation for the therapies we benefit from today, led to Brown and Goldstein receiving the Nobel Prize for Physiology or Medicine in 1985. When the cholesterol test results came back for my family, my father and I received a diagnosis of Familial Hypercholesterolemia (FH). Although as a child, I could not comprehend why my father and I were different from the rest of our family, I understood that it had something to do with the science of our bodies. Being diagnosed with FH sparked a scientific curiosity in me which has persisted my entire life. Today, I am a molecular biologist and biochemist, conducting cancer research and mentoring the next generation of scientists. As I reflect back on the scientific advances which have been made in my own and my father’s lifetime, I am filled with wonder. From the first peek at the structure of DNA in Rosalind Franklin’s “Photo 51” to the completion of the human genome project in 2003, scientific research has catapulted us into an era in which the unique details of our genomes may allow a tailored approach to therapy, in an effort known as “precision medicine”. Indeed, the discovery of mutations in the PCSK9 gene, by Catherine Boileau and colleagues, has leap-frogged the field forward, leading to a new therapeutic approach for people living with FH in the form of PCSK9 inhibitors. We are fortunate to live in this time, when the mysteries of our genomes are translated into action, improving our lives. Colleen Sweeney, PhD