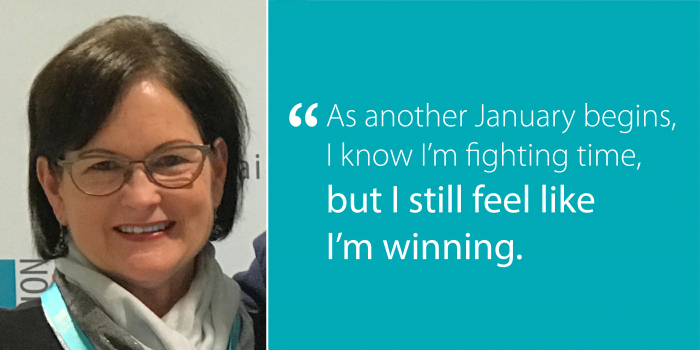 Today, Casey Walsh, FH Advocate for Awareness, shares her insights on the new year, birthdays, and what each year additional year living with familial hypercholesterolemia (FH) means to her.

Here we all are, welcoming yet another new year. My social media feed is filled with all sorts of wishes for success and happiness and, most of all, good health in the 365 days that lie ahead. My 65th full year on the planet stretches out ahead of me, ripe with possibility.

Of course, with anticipation comes an equal measure of reflection. For the decades I worked in a public school, just after the start of the school year there was always a bright spot: my birthday. One morning several years ago, as the strains of the pledge of allegiance faded away, the school secretary, Colleen, requested our attention. She named the students with September birthdays, then wrapped things up with a flourish:

“And this morning, a very happy birthday to Mrs. Walsh and to Coach Perkins, who’s…30 today! If you see him, be sure to wish him well!”

I was happy to share my day with Dave, the pied piper of PE, a popular guy who’s developed a following among the kids in our building. But I’m 60, I thought. This is a big deal! Feeling a ridiculous twinge of disappointment, I shrugged my shoulders and moved on.

Later, I ran into Colleen as I picked up my mail.

“I didn’t think you’d want it advertised,” she smirked.

With an eye roll and a laugh, I turned away, but not without a passing thought: Ah, but actually, I do.

I’ve always loved my birthday, somewhat unexpected for a woman of a particular age. Oh, I enjoy the fuss, the cake and the gifts, the friends and family gathered together to celebrate…well, me. But it’s more than that. Feeling special is nice. Feeling grateful is another sensation entirely.

It comes down to this: they’re all dead now. My parents, my brother, my son and my ex-husband, too. And his parents. The aunt who raised me, along with her husband. Even my mom’s best friend, El, who stepped in for her when I had my first child. The one who died.

You get the picture. They’re gone, and most so young. Twenty, 27, 49, mid-50s. They each left me gifts, of course…love and confidence, freckles and hair color, words of guidance and cautionary tales. But my parents left me genes, too. My father’s death at 50 and my brother’s at 27, both of heart disease, let me know the odds were not on my side.

Over the years, I paid attention. The trifecta of getting married, flying to Atlanta to bury my brother after his sudden cardiac arrest, then beginning my first real job—all within a month—was nothing compared to receiving the news a year later, at 21, that I had inherited a genetic disorder, Familial Hypercholesterolemia – FH for short. FH had put me in a vastly different demographic from that of a number of my friends, who as years passed were diagnosed with high cholesterol themselves.

In my 30s and 40s, I often heard, “You’re how old today? No way!” Sometimes I hated that, wondering if looking younger meant I seemed tentative and unsure. It seemed an unsettling contradiction then, smiling at the ubiquitous “but you look so young” as I feared my insides were anything but.

For decades after the FH diagnosis, I struggled through a difficult marriage in a small town, battling the depression I see now was tough to avoid. Undaunted, I returned to school in my late thirties, balancing the kids’ Scout meetings and guitar lessons, soccer games and snowboarding with my own exams and research papers and scary snowy drives. There were years when the onslaught of challenges—a hostile divorce, adolescents on the wrong path, the death of my oldest son—made it near impossible for me to imagine the luxury of self-care. Many a morning I lay in bed, too tired to exercise, fearing someday it would be too late.

Today, happily remarried with four kids between us, ten grandkids and counting, I’ve come to terms with the losses as well as I suppose any of us can, and I’m grateful every day for the life I have. After more than 40 years of monitoring for heart disease and testing cholesterol, I’m still here, and no one is as surprised as I am. Now that it’s no longer about survival, I’m more eager than ever to live and willing to do the work it takes to stay alive.

After a lifetime of envying the runners I saw breeze past, I decided at 50 it was now or never. I’d always loved the idea of feeling like I was flying, tied down by nothing. By my 60th birthday, I’d been running for 10 years.

In 2013, just after a cardiac calcium score high enough to make me take notice, I watched Forks Over Knives and committed to a vegan lifestyle that, though restrictive, I hoped would improve my vascular health. I tossed the contraband, spent hours in the grocery store, and for a couple of years was solidly veganish, occasionally eating fish. Still, when blood work revealed the diet had done little to move my numbers, I found a cardiologist who understood FH, added a PCSK9 inhibitor to the statins I’d been taking for years, and had LDL levels within the targeted range for the first time in my life. I’m reassured to see my daughter and her daughter both getting an early start on managing their own FH so that they can enjoy long, healthy lives.

Today, in my third year of retirement, I’m more excited about the future than ever. In some ways I wish I’d known back then—during the dark days—that my 60s would look like this, that at the age when the clock starts to tick a little louder, everything would also be a little sweeter. I wonder sometimes whether other people who have had lives less ridden with loss and death and struggle have ended up as happy as I am in the midst of their seventh decade. Maybe my attempts at healthy diet and exercise and finding appropriate medical care are finally paying off. Maybe I’m reaping the rewards of sticking it out through the hard times.

Or maybe I just got lucky.

As another January begins, I know I’m fighting time, but I still feel like I’m winning. Sometimes I don’t run as often as I’d like, and these last ten (okay, twenty) pounds are more stubborn than ever. I’ll work harder than ever this year to keep those health-related New Year’s resolutions while applying the same compassion to myself as I do to those around me. Still, when I get too discouraged about the state of my aging body, I consider that I never thought I’d live this long, much less look this much like my younger self at this age. Yes, there seems to be a new malady every year, annoying new aches and pains (“The parts are wearing out,” my husband observes), yet most days, it still feels a little like I’m flying.

Either way, whether it’s announced over a loudspeaker or worked into conversation, let me be clear: Each new birthday—each new year—is cause for celebration. These days, appearing younger than I am doesn’t seem like such a negative somehow. So if you’d like to slip in an, “Oh, you can’t possibly be that old,” I’ll take it.

Consider it my reward for having beaten the odds.

Casey Mulligan Walsh is a writer who lives with her husband, Kevin Walsh in West Sand Lake, NY. She is currently at work on a memoir.

4 Responses to “Reflecting on a New Year”